Some people have bad days. Henry Altmann (Williams) has one every day. Always unhappy and angry at the world including everyone in it, Henry sits impatiently at the doctor’s office when he is finally seen by Dr. Sharon Gill (Kunis). Sharon, who is enduring her own bad day, reveals that Henry has a brain aneurysm. This news makes Henry even angrier, yelling at Sharon he demands to know how much time he has left. Faced with Henry’s anger and insults, Sharon abruptly tells him he has only 90 minutes. Shocked and reeling by this news, Henry storms out of the office leaving Sharon stunned by what she has just done in a lapse of judgment. As Sharon goes on a city-wide search, Henry struggles with his diagnosis, determined to make amends with everyone he has hurt in his life. 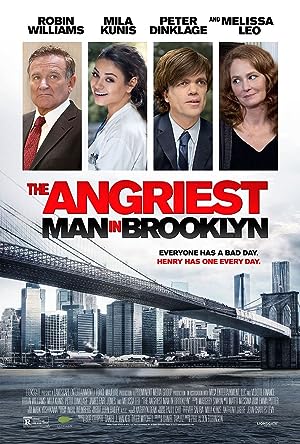 The Angriest Man in Brooklyn (2014)
83 min|Comedy, Drama|23 May 2014
5.7Rating: 5.7 / 10 from 20,667 usersMetascore: 21
A perpetually angry man is informed he has 90 minutes to live and promptly sets out to reconcile with his family and friends in the short time he has left.
Director: Phil Alden Robinson
Creator: Daniel Taplitz (screenplay by), Assi Dayan (based on the film "The 92 Minutes of Mr. Baum" written by)
Actors: Robin Williams, Mila Kunis, Peter Dinklage, Melissa Leo
View on IMDb Play on Netflix