Sportsman Channel, the leader in outdoor TV for the American Sportsman, has secured a partnership with author, hunter and outdoorsman Steven Rinella, to launch the new original series, MeatEater. The weekly half-hour series is a Sportsman Channel original production with Emmy-winning production studio, Zero Point Zero, and will premiere on January 1, 2012 at 9 pm ET.

Growing up in the Midwests great outdoors hunting, fishing and trapping from a young age Rinella has always viewed the world through the eyes of an ancestral hunter/gatherer. Entranced by early mans skill, ingenuity and sheer determination to survive and thrive under challenging circumstances, Rinella has made it his lifes work to cultivate those same qualities and encourage people to recognize it in them. Raising a family and working as a writer in New York City, Rinella is an effective ambassador of the sportsmans lifestyle to urban and suburban audiences.

Fresh off the success of his series The Wild Within, and numerous national magazine articles and two books, Rinella is ready to feed fans appetite for tracking prey to create mouth-watering fireside meals. In MeatEater, Rinella will deconstruct and master any hunting technique; track and pursue prey; and procure his own food. Whether tracking black-tail deer in the remote Alaskan wilderness, or rooting out Javelina in Texas, Rinella will defer to his back-country roots, challenging himself at every corner while providing nail biting adventure along the way.

We are big fans of Stevens story-telling on TV, in magazines, and in his two terrific books, said Gavin Harvey, CEO of Sportsman Channel. He is extraordinarily talented at conveying the emotional and spiritual aspects of what it means to be a hunter, what really drives us to prey on and consume wild game. With the premiere of MeatEater on Sportsman on New Years Day, fans of great outdoor TV have another reason to pop the champagne.

Hunting to me is primarily about the acquisition of food that is the most important thing to me, said Steven Rinella, host. Quite simply, I like to eat wild game. That said, I have a great respect for the trophy element of hunting I love the emblem of deer antlers and bear skulls. I also have a great respect for the adventure I love the journeys, the places I get to go, and the people I get to hang out with. But all of that falls under the umbrella of hunting for my own food. Essentially, I am a hunter because I am a MeatEater.

MeatEater will showcase Rinella in his best form from hunting Black Bear in Alaska to tracking a Mountain Lion in southern Arizona. But Rinella can also bowhunt as he proves when he goes after Javelina in west Texas. Plus, he joins a biologist friend on a riverboat through some of the most untouched wetlands in Alaska for big-time duck hunting.

Each episode will end with Rinella preparing the days harvest for a mouth-watering meal. When Rinella chases the elusive Aoudad sheep in Texas, he prepares a North American style clay pot sheep. When I eat a wild animal that I respect and admire, I feel like I capture some element of that animal and take some of that wildness into myself, said Rinella. Without that feeling essentially tasting the wild the experience of hunting is incomplete. And if I am going to eat it, I had better give the animal the respect of cooking it properly and with great care.

Steven Rinella is an avid outdoorsman, writer, and television personality best known for his ability to translate the hunting lifestyle to a wide variety of audiences. He is the author of The Scavengers Guide to Haute Cuisine and the award-winning American Buffalo: In Search of a Lost Icon. Rinellas writing has appeared in such publications as the New York Times, Glamour, Mens Journal, Outside, New Yorker and more traditional hunting and fishing publications like Field and Stream. He is a columnist for Petersens HUNTING, has appeared on NPRs All Things Considered, CNNs American Morning and Fox and Friends. 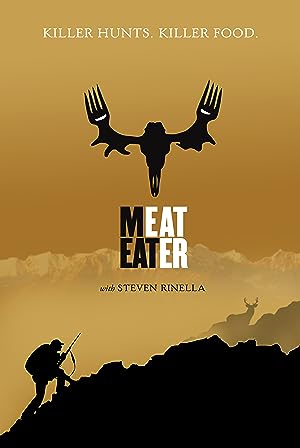 MeatEater (2012–)
21 min|Documentary|01 Jan 2012
7.8Rating: 7.8 / 10 from 952 usersMetascore: N/A
A man travels around the vast wilderness hunting various animals. He hunts everything from birds to bears. Once the animal is bagged he demonstrates how to process the game and cook it.
Actors: Steven Rinella
View on IMDb Play on Netflix