Beneath Bruce Garrett’s under-confident, overweight exterior, the passionate heart of a salsa king lies dormant. Now, one woman is about to reignite his Latin fire. Twenty-two years after retiring his dancing shoes, former almost-champion salsa expert Bruce Garrett tries to regain his form in this romantic comedy. The salsa king once had hips of fire. Look past the paunch and low self-esteem and you’ll find they still don’t lie. 1987: A 13 year old natural born dancer with fire in his heels and snakes in his hips is working himself up to explode all over the UK Junior Salsa Championships. But then: a freakish bullying incident on the mean streets of London robs him of his confidence, and our young hero finds his life diverted down a very different path. So it is that 22 years later, an adult Bruce Garrett (Nick Frost) finds himself out-of-shape and unloved – trapped in a downward spiral of self-pity, repression and Nando’s take-outs. Only Julia (Rashida Jones), his smart, funny, gorgeous new American boss, gives him reason to live. But she’s untouchable. Out of his league, so he imagines, with her perfect smile and perfect life. Unknown to Bruce however, Julia has issues all of her own. Luckily for him, she also has a secret passion. Then there’s Drew (Chris O’Dowd), his alpha male colleague and horny king-monkey of the office. With Drew making no secret of his desire to get (his words) “all up inside Julia”… 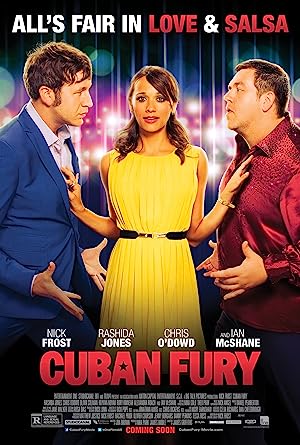