As the series comes to a hilarious and moving close, Kimmy has to choose between helping her friends, Titus (Tituss Burgess), Jacqueline (Jane Krakowski) and Lillian (Carol Kane), and helping someone she’s never put first before: herself. This final season includes a double-sized “Sliding Doors” episode exploring how the main characters’ lives might have been different if Kimmy had never been kidnapped.

After being rescued from an underground bunker in which she lived the past fifteen years, Kimmy Schmidt decides to move to New York City to have a normal life. She makes friends with her new roommate Titus, and works as a babysitter for Jacqueline Voorhees, the wife of a billionaire with many issues. Even though many obstacles are thrown her way, Kimmy makes the best of her new life while having to adapt to the new world around her. 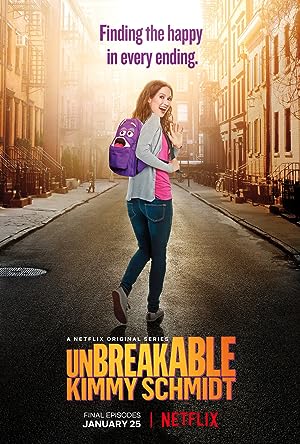