Featuring an all-star cast, the timeless story comes to life in this all-new, feature-length film filled with fun and adventure! Little E. wakes the control tower up, so she can start work. She dreams of being a dream hauler. But the control the tower confirms that she is too small to pull her own train. She gets a little help from Rusty, an old and wise Engine. In the Real World, a boy named Richard shows his friend Marcus, his grandfather’s watch. Two bullies named, Scott and Stretch, throw a snowball at Richard, which makes him slip and hand the watch over to them. He is worried that his dad would be unhappy if he lost the watch. Marcus tries to help him, but Richard does not want help from him. Richard decides to take a walk in the park, but trips over some train tracks he has never noticed before. He boards a train to take shelter from the cold, and suddenly is whisked away to DreamLand. While passing through the tunnel to DreamLand, the tunnel collapses, trapping Richard and the trains in DreamLand. The Tower demotes Rusty to a track-cleaner. Little E. offers to take Richard home on the rumored tracks that lead over the mountain. The Tower, looking for a way to preoccupy Little E. and Richard while the other trains try to do the important work of clearing the tunnel, agrees, sending them both on their way while also promising to give Rusty his job back afterwards and even throw him a Ticker-Tape Parade. Little E. finds the track leading up the mountain. Along the way, they encounter the Nightmare Train, but trick him into speeding down a side-track, and are able to continue on their way. This shows Richard how to stand up to bullies. Little E., with the help of Richard, also deals with a water leak and a derailment, and eventually makes it over the mountain to the Real World. Little E. returns to DreamLand, tells her story about her trip over the mountain, and is promoted to a dream hauler as a reward for her bravery. Once back, Richard has gained the confidence to confront the bullies and get his watch back. During the Credits, the following photos are shown: Richard showing his watch to his class, the Sock Monkey being loved, the Nightmare Train defeated and derailed on a snow bank, Rusty’s Ticker-Tape Parade, and lastly, Little E. taking more trains through the Mountain. 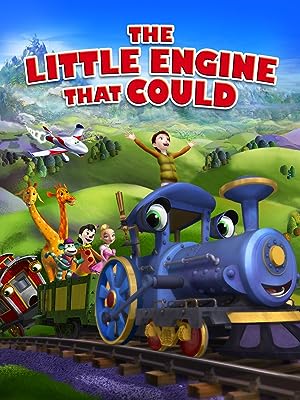