Three years into the American Civil War, in 1864, the dilapidated mansion of Miss Martha Farnsworth’s Seminary for Young Ladies is still running, occupied by the matriarch, a teacher and five students in Spanish moss-draped Virginia. However, when a young student stumbles upon Corporal John McBurney, a wounded Union deserter on the verge of death, the already frail balance of things will be disrupted, as the hesitant headmistress decides to take him in to heal from his injury. Little by little, as the unwelcome guest arouses an uneasy sexual excitation among the women of the secluded boarding school, it is not before long that they will find themselves competing for the alluring man’s favour. Undoubtedly, this handsome devil is a manipulator, nevertheless, will the ladies stay forever beguiled by his charm? 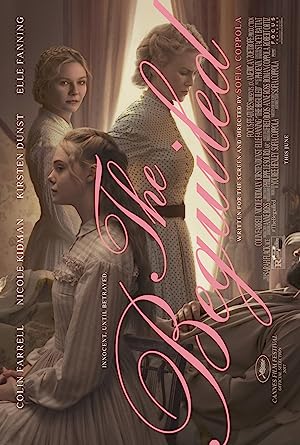 The Beguiled (2017)
93 min|Drama, Thriller|30 Jun 2017
6.3Rating: 6.3 / 10 from 46,863 usersMetascore: 77
The unexpected arrival of a wounded Union soldier at a girls school in Virginia during the American Civil War leads to jealousy and betrayal.
Director: Sofia Coppola
Creator: Sofia Coppola (screenplay by), Thomas Cullinan (based on the novel by), Albert Maltz (and the screenplay by), Irene Kamp (and the screenplay by)
Actors: Colin Farrell, Nicole Kidman, Kirsten Dunst, Elle Fanning
View on Netflix View on IMDb