God-fearing Noah and his wife Emmy work a farm in a barren landscape with their married sons Shem ,Ham and Japheth and their wives and naïve teen-aged son Kenan. On a visit to the pleasure loving city Kenan falls for the hedonistic life-style of Sabba, daughter of Noah’s atheist friend, wealthy trader Paul, and he visits her on a nightly basis. When an angel tells Noah to build an ark because his world will soon be engulfed by a huge flood Noah takes the news seriously but his family do not believe him and when he tries to warn the citizens he is reviled and pelted with rocks. Eventually Emmy shames the boys into helping Noah and the ark is completed though there is no sign of rain. Godly fugitives from the city arrive and, when the flood comes, are welcomed on board with a host of animals and birds but Kenan elects to stay with Sabba and they are drowned along with the other unbelievers. After the flood has abated the angel reappears to show Noah a rainbow, a symbol of hope. 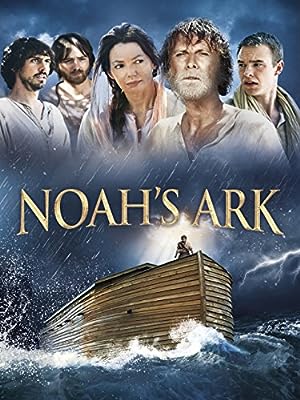