La grande Séduction (original title) – Ste-Marie-La-Mauderne is a small, depressed coastal village in Québec, where even fishing as an industry has died. Almost everyone is on welfare, including Germain Lesage. An option for most townsfolk is to move to the city, something that Germain refuses to do, even though his wife, Hélène, wants to at least consider it, just because her brother could provide her with a job. The Mayor, Réal Fournier, would sell out the townsfolk in his attempts to lure industry to the town, still with no takers. Part of their catch-22 situation in luring industry there is that there is no doctor, a condition made by one company owned by M. Dupré that would potentially locate his new plastic container factory there. As such, Germain and a few of his friends, Henri Giroux and Yvon Brunet, decide to reach out to every doctor in Québec to see if he/she can be enticed to move there. Due to a little police strong-arming, they get one nibble in the form of thirty-three year old Montréal plastic surgeon, Dr. Christopher Lewis, who is somewhat blackmailed to live in Ste-Marie for one month. Germain figures they have to captivate him on first sight of the town – not easy as the ugliest building is the first thing one sees entering the harbor – which includes giving him Henri’s house in which to live, Henri the only person with a half-decent house as the town’s sole bank employee and thus the de facto branch manager, although all he really does is cash everyone’s welfare checks. They will also use intelligence they gather about him both before his arrival and during his stay – the latter in not the most ethical manner – to cater to his every whim making him think that these items are just everyday aspects of town life regardless of if they even know about what he’s talking (cricket matches? beef stroganoff?). But what may be the most difficult part, in the words of Germain, is to make him think that he’s in the best place on earth while being in a dinghy. All the while, they also have to manipulate M. Dupré, who may be more and more difficult to manage in his expectations of the town. 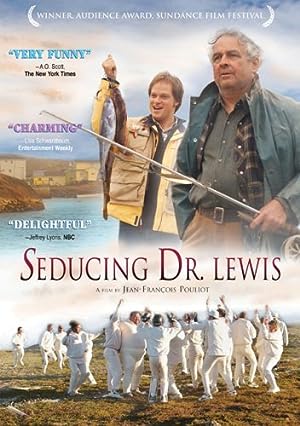 Seducing Doctor Lewis (2003)
108 min|Comedy|26 Mar 2004
7.4Rating: 7.4 / 10 from 4,983 usersMetascore: 59
A much-needed boost, in the form of a new factory, is promised to the residents of the tiny fishing village St. Marie-La-Mauderne, provided they can lure a doctor to take up full-time residency on the island. Inspired, the villagers devise a scheme to make Dr. Christopher Lewis a local.
Director: Jean-François Pouliot
Creator: Ken Scott
Actors: Raymond Bouchard, Dominik Michon-Dagenais, Guy-Daniel Tremblay, Nadia Drouin
View on IMDb Play on Netflix