Gifted poker player and law student Mike McDermott (Matt Damon) dreams of playing in the World Series of Poker (WSOP) and sitting next to his idol Johnny Chan. Unfortunately, Mike loses his entire $30,000 bankroll after being outplayed in a hand of Texas hold’em against Teddy “KGB” (John Malkovich), a Russian mobster who runs an illegal underground poker room. Shaken, Mike decides to concentrate on law school while promising his girlfriend and fellow law student Jo (Gretchen Mol) that he will not play poker anymore. Mentor and fellow rounder Joey Knish (John Turturro) offers McDermott a part-time job driving a delivery truck to make ends meet.

Time passes and Mike stays true to his promise. He focuses on school and work until his childhood friend Lester “Worm” Murphy (Edward Norton) is released from prison. While Mike is a card player, Worm is a hustler who often cheats to win. He also owes an outstanding debt accumulated before his incarceration. While Mike looks down on Worm’s cheating, Mike was involved in the activity that got Worm imprisoned. Worm protected him from consequence so Mike is fiercely loyal and always willing to help him out. Worm’s old business partner, Grama, has now partnered with Teddy KGB and bought up his outstanding debt. At Worm’s influence, Mike is soon rounding again, which interferes with his studies and hurts his relationship with Jo.

Worm is given a five-day deadline to pay off his debt and Mike joins him in a furious race to earn the money. Worm wants to cheat to win, but Mike insists on playing the game straight. Playing in several card games in and around New York City, the two nearly make the $15,000 needed. Worm joins a game against Mike’s recommendation out of town hosted by New York State Troopers. Worm then gets caught “base-dealing” (dealing favorable cards from the bottom of the deck). They are beaten up and their entire bankroll is taken. After this, Worm, not wanting to face his problems, decides to leave New York City, and he advises Mike to do the same.

Mike refuses to flee and instead, with the help of a $10,000 loan from his law school professor Petrovsky (Martin Landau), Mike challenges Teddy KGB to a second game of heads-up, No-Limit Texas Hold’em. Mike beats Teddy in the first session, and has enough money to pay off Worm’s debt along with half of the $10,000 he’d borrowed from Petrovsky. As he is about to leave, KGB taunts Mike, and points out that Mike has only won back only some of his own money that he lost before. Mike hesitates before agreeing to play again, which would risk all of the money and possibly his life, as losing would leave him unable to pay Grama and KGB. As the night wears on, Mike is on the verge of losing all of his chips. Mike suddenly spots a tell, a repeated behavior that allows him to know the value of Teddy’s hand. Teddy KGB is furious when he realizes this, and goes on “tilt”, meaning he is playing very poorly. Mike, drawing on inspiration from an old poker video of the WSOP featuring Chan, seizes this opportunity, and outplays Teddy in the same manner as he was earlier for the rest of his chips. 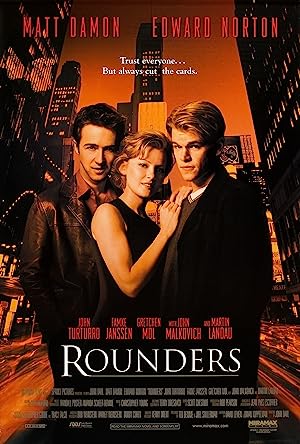