Taylor and two other astronauts come out of deep hibernation to find that their ship has crashed. Escaping with little more than clothes they find that they have landed on a planet where men are pre-lingual and uncivilized while apes have learned speech and technology. Taylor is captured and taken to the city of the apes after damaging his throat so that he is silent and cannot communicate with the apes. 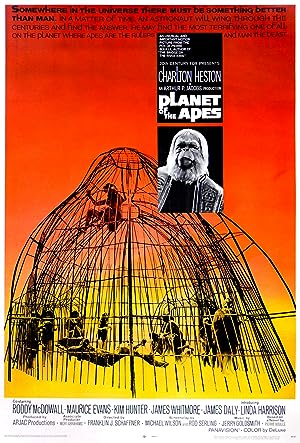 Planet of the Apes (1968)
112 min|Adventure, Sci-Fi|03 Apr 1968
8.0Rating: 8.0 / 10 from 163,386 usersMetascore: 79
An astronaut crew crash-lands on a planet in the distant future where intelligent talking apes are the dominant species, and humans are the oppressed and enslaved.
Director: Franklin J. Schaffner
Creator: Michael Wilson (screenplay by), Rod Serling (screenplay by), Pierre Boulle (based on the novel by)
Actors: Charlton Heston, Roddy McDowall, Kim Hunter, Maurice Evans
View on IMDb Play on Netflix