Derek Charles is a hard working man, employed as a asset manager in a private company. He is very happy with his beautiful wife, Sharon, and only son, and because of his hard work he just got a huge promotion. But suddenly he gets a temporary worker who is both attractive and smart, and Derek is understandably impressed with her and also finds himself physically drawn to her. However, this new girl is desperate to get close to him – at any cost. 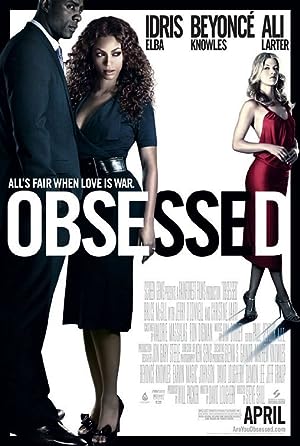 Obsessed (2009)
108 min|Drama, Romance, Thriller|24 Apr 2009
5.0Rating: 5.0 / 10 from 29,204 usersMetascore: 25
A successful asset manager, who has just received a huge promotion, is blissfully happy in his career and in his marriage. But when a temp worker starts stalking him, all the things he's worked so hard for are placed in jeopardy.
Director: Steve Shill
Creator: David Loughery
Actors: Idris Elba, Beyoncé, Ali Larter, Jerry O'Connell
View on IMDb Play on Netflix