Richard Thorncroft is a has-been British TV actor who used to be famous in the late 1980’s for playing the titular and charismatic lead role in the Isle of Man detective show Mindhorn, a character with a Robotic eye that can literally “see the truth”. Unfortunately, after becoming a little too pompous and arrogant, Richard ends up insulting both the Isle of Man and his fellow cast members on the Wogan chat-show, including his on-screen and real life love interest Patricia DeVille, (Effie Davies) his Stuntman, (Simon Farnaby) and bit-part costar Peter Easterman. (Steve Coogan) He decides to leave to try and make it big in Hollywood, but 25 years later and he’s balding in a flat in North London and has recently been replaced for an orthopaedic sock advert by John Nettles, much to his chagrin. He is even more jealous that Easterman now fronts a long running spin-off show which has far eclipsed the success of Mindhorn. Richard has an unexpected opportunity to reignite his career though when a delusional criminal calling himself “The Kestrel” (Russell Tovey) starts terrorising the Isle of Man and, having an extremely unhealthy obsession with the show, demands to talk only to Mindhorn. Relishing a chance for publicity, Richard dons his turtleneck and robot eye, aggravates the police with his method acting, tries to rekindle his old romance with Patricia and also attempts to sign a Mindhorn DVD deal with Easterman. With his 80’s political incorrectness, solo musical single, useless cyborg eyepatch and cheesy one-liners, Mindhorn is here to bring an Apocalypse of Justice. It’s truth time. 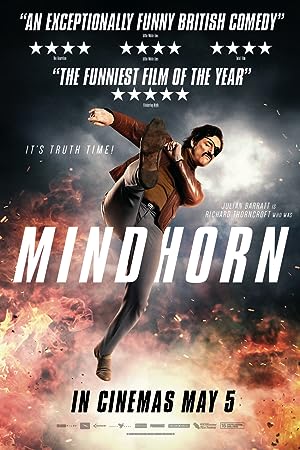 Mindhorn (2016)
89 min|Comedy|05 May 2017
6.3Rating: 6.3 / 10 from 10,822 usersMetascore: 70
A has-been actor best known for playing the title character in the 1980s detective series "Mindhorn" must work with the police when a serial killer says that he will only speak with Detective Mindhorn, whom he believes to be a real person.
Director: Sean Foley
Creator: Julian Barratt (screenplay), Simon Farnaby (screenplay), Simon Farnaby (based on an original idea by)
Actors: Julian Barratt, Simon Farnaby, Essie Davis, Steve Coogan
View on IMDb Play on Netflix