The stand-up sensation tackles TV’s “Shark Tank,” what it means to be a woman and how to deal with the lawless party goblin that lives in us all. Iliza Shlesinger delivers her fearless, fresh brand of stand-up comedy at the Vic Theatre in Chicago. For Shlesinger, who offers plenty of real talk for women and men alike, young and old, Confirmed Kills reflects her evolution as a performer and a person. “I felt a sense of obligation as a comedian who’s growing and as a woman to not just make fun of women, but to really take the side of a woman and do some sort of digestible feminism,” the 33-year-old comic tells EW in a recent phone interview while on the road in Canada. “I didn’t want to exclude men — I think men like my comedy because it’s all-inclusive — and I really wanted to say something smart. Of course it’s about making people laugh, but I have this incredible platform to stand up for people and to say something intelligent.” 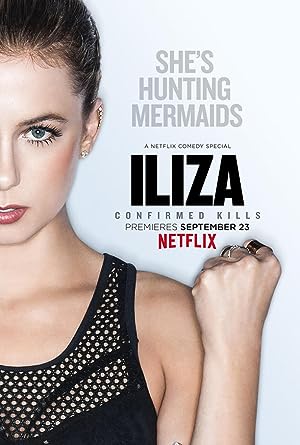 Iliza Shlesinger: Confirmed Kills (2016)
77 min|Comedy|23 Sep 2016
6.6Rating: 6.6 / 10 from 2,420 usersMetascore: N/A
Iliza Shlesinger performs in this standup talking about dating, feminism and some of the intricacies associated with being a woman in the 21st century.
Director: Bobcat Goldthwait
Creator: Iliza Shlesinger
Actors: Iliza Shlesinger
View on IMDb Play on Netflix