An international animation project that is coming out in Russian and English languages. It is a fairytale about a grand life journey of a 10-year old boy Savva devoted to help his Mom and fellow village people to break free from the vicious hyenas. Trying to escape from hyenas Savva finds himself in a magical world he had only heard stories of. That is where he meets the white wolf Angee, a hilarious tiny pink creature Puffy, a strange looking semi-baron FAFL and his passenger, as well as Nanty, Shaman’s charming daughter. New friends help Savva through his journey to the Magician that lives on a mountain and, as legend has it, might help Savva free his village from the angry hyenas. However, each of them have their own reasons to see the magician that some of them keep only to themselves. On their way to the Magician the friends will face multiple dangers, pleasant and unpleasant surprises, discover terrifying secrets and even have a battle with a monkey army, led by the cruel and treacherous Mom JoZee – a three-headed monkey queen. “SAVVA-Heart of the Warrior” is a story about a big dream, true friendship and growing strong at heart to overcome difficulties together. It is an exciting and bright animated fairytale. When an evil queen’s henchmen capture the residents of a cursed village, a young boy embarks on a dangerous mission to free them. A boy’s village was once protected by wolves. Now it’s his turn to be brave and save them — and his family. 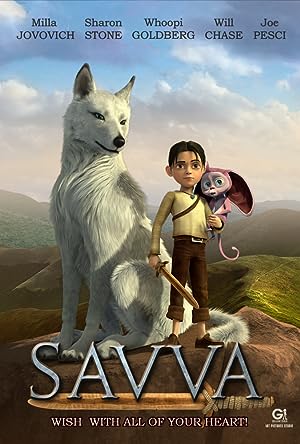