Claire Duncan (Liv Hewson), a cute if slightly nerdy 20-year old college student, is obsessed with Korean drama. While most co-eds are out partying, she’s glued to the screen watching her favorite K-Drama actor, Joon Park (Sean Dulake), in ‘Taste of Love.’ Dreamy, charming, and downright adorable, Joon Park is more than Claire’s fantasy. He’s her knight in shining armor, the man of her dreams. Claire’s waking days, sadly, are not nearly as thrilling as the ones depicted in the K-Drama world. Between work and school, her only escape is the glamour and excitement of ‘Taste of Love’ and Joon Park’s intoxicating charm and good looks. Like a girl lost in love, Claire spends almost every second wishing he would walk through the doors and sweep her off her feet. Her world, however, is turned upside down when, through a twist of fate and a touch of magic, she finds herself sucked into her smartphone and transported inside the world of her favorite K-Drama. Stuck inside Dramaworld, Claire finally gets to meet Joon Park in the flesh. But now that she’s a leading lady, she can’t just watch the drama unfold. She’s got to be part of it. 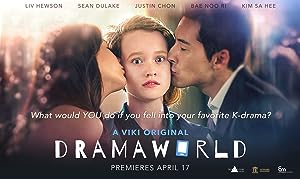