When the king of Brittania dies, the dragon who shares his heart must find a new ruler, but the monarch’s grandchildren go to war over the throne. Patrick Stewart voices Drago, the magnificent dragon who became bonded with King Gareth. When the king dies, his potential heirs, twin grandchildren who possess the dragon’s unique strengths, use their inherited powers against each other to vie for the throne. When Drago’s source of power – known as the Heartfire – is stolen, more than the throne is at stake; the siblings must end their rivalry with swords and sorcery or the kingdom may fall. 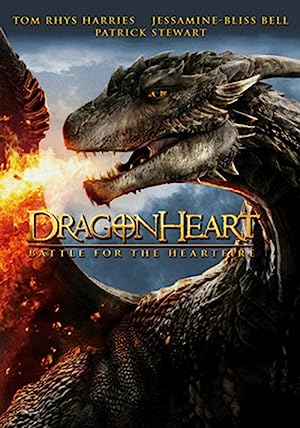 Dragonheart: Battle for the Heartfire (2017)
98 min|Action, Adventure, Drama, Fantasy|13 Jun 2017
5.3Rating: 5.3 / 10 from 2,080 usersMetascore: N/A
A dragon known as Drago tries to end the rivalry between a brother and sister, both having dragon-like powers, who are after the throne of their grandfather, while a new threat steals Drago's source of power.
Director: Patrik Syversen
Creator: Patrick Read Johnson (based on characters created by), Charles Edward Pogue (based on characters created by), Matthew Feitshans
Actors: Patrick Stewart, Tom Rhys Harries, Jessamine-Bliss Bell, Tamzin Merchant
View on IMDb Play on Netflix