It’s 1984, and Richard Branson, a maverick British music mogul has just made a big decision- to take on British Airways, and set up his own airline. But with just one plane, a minimal marketing budget, and a flair for self-promotion, he quickly realizes that in order for the airline to survive, he needs to pull off a major publicity stunt. What Branson does next is ambitious, daring and more than a little bit crazy. Enlisting the services of Per Lindstrand, one of the world’s most experienced hot air balloonists, he decides to try to cross the Atlantic Ocean. For the first time in history. And so begins a series of death-defying record attempts that risk the end of the bearded balloonist, and his business empire. The real story of this incredible adventure has never been told, and using intimate interviews with Branson and the team, never seen before archive (including footage from inside the balloon, shot in real time) and dramatic reconstruction, Don’t Look Down is a story of courage, determination, despair and ultimate triumph. 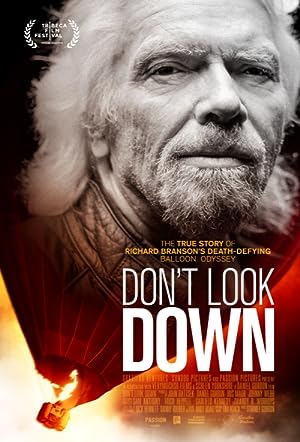