Safecracker Dom Hemingway (Jude Law) is released after spending 12 years in prison and seeks payment for refusing to rat out his boss Ivan Fontaine (Demián Bichir). He reunites with his best friend Dickie (Richard E. Grant) and they travel to Fontaine’s villa in the French countryside. Dom flirts with Fontaine’s Romanian girlfriend Paolina (Mădălina Diana Ghenea) and becomes angry that he spent 12 years in jail for Fontaine. He begins to mock Fontaine and storms out. At dinner, he apologises and Fontaine presents Dom with £750,000.

They spend the night partying with two girls, one of whom, Melody (Kerry Condon) strikes up a conversation with Dom. When the group go driving in Fontaine’s car, they crash into another car. While unconscious, Dom has a vision of Paolina asking for his money. He wakes up, resuscitates Melody, and finds Fontaine impaled on the car’s fender. Melody tells Dom that, because he saved her, he shall gain good luck when he least expects it.

Dom and Dickie head back to the mansion, where they find Paolina has taken Dom’s money, but they see her leaving in a car. Dom runs through the forest and into the road, where he is almost hit by Paolina. She asks him if she strikes him as a woman who wants to be poor, and drives away. 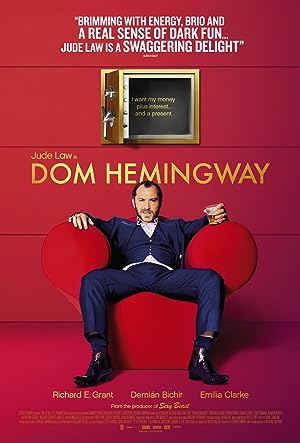