Law student and all round good guy, Harper, suspects that his scheming step-father, Vincent, is responsible for the car crash that sent his mother into a coma. Drowning his sorrows one evening in a seedy L.A whiskey bar, Harper is interrupted by a tough looking redneck called Johnny Ray who offers to ‘take care’ of his step-dad for the cool sum of US$20,000. Angry, intent on revenge and fuelled by alcohol, Harper agrees to the deal and spends the rest of his evening downing shots with Johnny Ray. The next morning, Harper awakes to the mother of all hangovers with hazy memory of the previous night’s events. Answering a knock at the front door, he is surprised to find Johnny Ray and his beautiful but distant girlfriend, Cherry, ready and waiting to drive to Vegas to kill Vincent. Harper’s claims that he was drunk and didn’t know what he was doing mean nothing to Johnny Ray who is more threatening than ever in the cold light of day. Harper quickly realises that there is no easy way out; if he wants to survive this, he has no choice but to go along with the plan. What follows is a tense and deftly constructed noir thriller in which Harper’s story takes an unexpected detour, presenting the audience with two alternate versions of events with two very different outcomes. Did Harper really want to kill his step father and which road did he actually take? 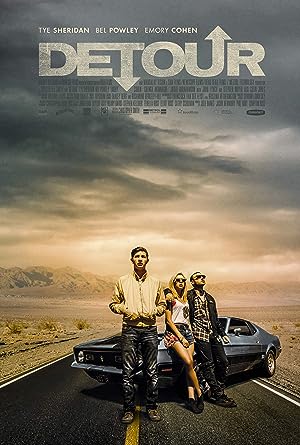 Detour (2016)
97 min|Action, Thriller|20 Jan 2017
6.2Rating: 6.2 / 10 from 5,238 usersMetascore: 46
A young law student blindly enters into a pact with a hoodlum who offers to kill his stepfather – a man he feels is responsible for the accident that sent his mother into a coma.
Director: Christopher Smith
Creator: Christopher Smith
Actors: Tye Sheridan, Bel Powley, Emory Cohen, John Lynch
View on IMDb Play on Netflix