Thirteen-year-old Ruthie Carmichael and her mother, Rita teeter on the edge of poverty, despite Rita working multiple jobs. When their landlord kicks them out, Rita uses her looks to instantly reel in a boyfriend, who takes them in. Before long, Ruthie convinces her mother to leave and they head East in search of a better life. When money runs out and their car breaks down, they find themselves stranded in a small town called Fat River where their luck finally takes a turn. Rita lands a steady job waitressing at the local diner. With enough money to pay their bills, they rent a house and Fat River becomes the first place they call home. Peter Pam, a transgender waitress, becomes Ruthie’s closest friend. Arlene, the no-nonsense head waitress, takes Rita under her wing. The townspeople become Ruthie and Rita’s family. Into this quirky utopia comes smooth-talking mortgage broker Vick Ward, who entices Rita with a subprime loan. Almost as soon as Rita buys a house their fortunes change. Faced once again with the prospect of homelessness, Rita reverts to survival mode, and the price she pays to keep them out of poverty changes their lives forever. 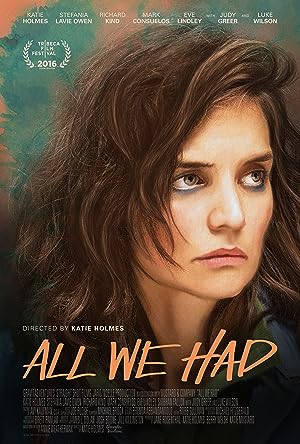 All We Had (2016)
105 min|Drama|09 Dec 2016
5.8Rating: 5.8 / 10 from 1,971 usersMetascore: 48
A mother struggles to make a better life for her daughter.
Director: Katie Holmes
Creator: Josh Boone (screenplay by), Jill Killington (screenplay by), Annie Weatherwax (based upon the book by)
Actors: Katie Holmes, Stefania LaVie Owen, Eve Lindley, Richard Kind
View on IMDb Play on Netflix