Three down on their luck buddies head to South America in order to hunt the world’s most wanted drug kingpin and collect the reward for his capture. Two “down on their luck” buddies are convinced by a third to take a vacation. Only after landing in Colombia, South America, do they realize that they are there to attempt to capture the United States most wanted criminal – with no military training. 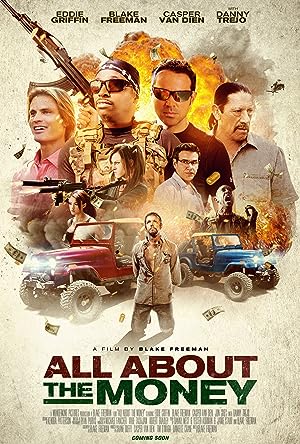 All About the Money (2017)
90 min|Action, Adventure, Comedy|02 Jun 2017
5.8Rating: 5.8 / 10 from 1,935 usersMetascore: N/A
A guy gets his 2 friends on a plane to Colombia making them believe it's vacation. However, he plans on catching a drug lord and collect the $25M reward. They don't speak Spanish and think Colombia is a city in Mexico.
Director: Blake Freeman
Creator: Blake Freeman (screenplay by), Danny West (story by), Lester Korman (story by), Jamie Starr (story by), Blake Freeman (story by)
Actors: Eddie Griffin, Blake Freeman, Casper Van Dien, Danny Trejo
View on IMDb Play on Netflix