Renowned ocean explorer Dr. Bob Ballard takes viewers to the deepest parts of the ocean, where priceless treasures both natural and man-made lurk.

Dr. Robert Ballard is one of the worlds most renowned ocean explorers, with such amazing finds as Titanic, the battleship Bismarck and JFKs PT1-09 to his name. But this time hes going on a journey like no other. Hes setting out on an odyssey down Mauna Keathe worlds tallest mountainand into the living heart of an active, underwater volcano. Facing crushing depths, frigid water, and the very real possibility of land slides and eruptions, Ballard enters the crater to explore the extreme geology that keeps our oceans fresh and our planet alive.

Dr. Robert Ballard is the greatest underwater explorer of his generation. But he reckons the tough job of shining a light into the abyss has only just begun. The oceans cover 71% of the planet a mere 5% of which has been explored. In that 5%, Ballard has found the Titanic, the Bismarck, the carrier Yorktown and entirely new forms of life. Just think of whats waiting for us in the remaining 95%! Alien Deep is Dr. Robert Ballard’s voyage of discovery, his often inspired, sometimes opinionated, vision of our ocean planet past, present and future! 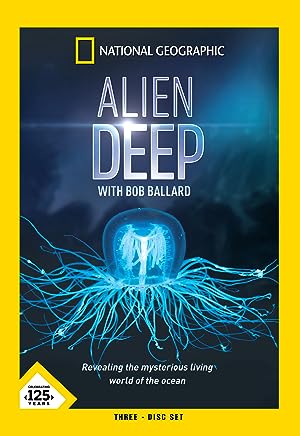