In A BIGGER SPLASH, the lives of a high profile couple, a famous rock star (Tilda Swinton) and a filmmaker (Matthias Schoenaerts), vacationing and recovering on the idyllic sun-drenched and remote Italian island of Pantelleria, are disrupted by the unexpected visit of an old friend (Ralph Fiennes) and his daughter (Dakota Johnson) – creating a whirlwind of jealousy, passion and, ultimately, danger for everyone involved. 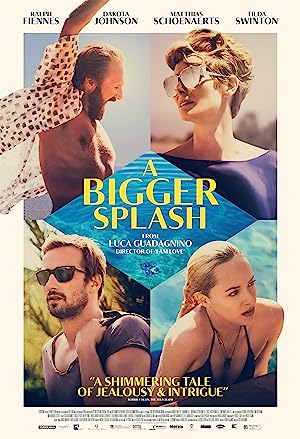 A Bigger Splash (2015)
125 min|Drama, Thriller|13 May 2016
6.4Rating: 6.4 / 10 from 26,741 usersMetascore: 74
The vacation of a famous rock star and her boyfriend in Italy is disrupted by the unexpected visit of an old friend and his daughter.
Director: Luca Guadagnino
Creator: David Kajganich (screenplay by), Jacques Deray (based on the film "La piscine" directed by), Alain Page (based on an original screenplay by), Alain Page (based on his novel "La piscine"), Jacques Deray (adaption by), Jean-Claude Carrière (adaption by), Jacques Deray (dialogue by), Jean-Claude Carrière (dialogue by)
Actors: Tilda Swinton, Matthias Schoenaerts, Ralph Fiennes, Dakota Johnson
View on IMDb Play on Netflix