Based on a true story. A man was in a car crash and was in the car, without a pulse for an hour and a half, while EMT’s and police waited for the coroner to pronounce him dead before he can be moved. A man comes along, who feels led to pray for the victim, gets in the car and starts to pray while singing praise songs. The ‘dead’ man starts singing along and EMT’s confirm he now has a pulse. The victim fights his recovery, as he is angry that he was in heaven, only to have God bring him back in incredible pain. Was there a purpose to his return to earth? 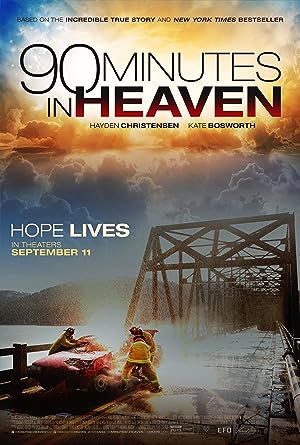 90 Minutes in Heaven (2015)
121 min|Drama|11 Sep 2015
4.8Rating: 4.8 / 10 from 3,345 usersMetascore: 28
A man involved in a horrific car crash is pronounced dead, only to come back to life an hour and a half later, claiming to have seen Heaven.
Director: Michael Polish
Creator: Michael Polish (screenplay by), Don Piper (based on the book by), Cecil Murphey (based on the book by)
Actors: Hayden Christensen, Kate Bosworth, Hudson Meek, Bobby Batson
View on IMDb Play on Netflix